In this post I’ll show some photos outlining the basic approach I’ve taken to the planting of guilds.  (Note: all of this is taken pretty much straight out of the method outlined in Edible Forest Gardens).

Here’s my initial sketch of the Hojiblanca Olive patch.  It outlines the rough locations of both the main tree and the surrounding plants.  As you can probably tell, it’s an incomplete diagram but fits the basic strategy I explained in a previous post whereby the supporting plants are local natives. 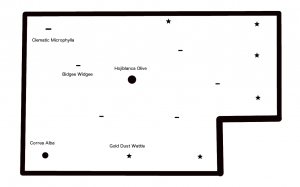 This Olive patch is located at the northernmost area of my backyard which is the area where both cold winter and hot summer northerlies blow through.  Thus, the olive is part of my overall strategy to mitigate the effects of those winds on the macadamia trees which are now directly south of the olive.  I expect the olive to do much of the windbreaking but I will also put some dense medium local shrubs around it to add further blocking power.  I also put a Lisbon Lemon in here as well. Although lemons don’t generally like a lot of wind, this placement was a compromise on my part and I’m hoping the wind won’t take too much of a toll on the lemon tree.  In any case, it will help to block more of the wind which will assist the macadamia. 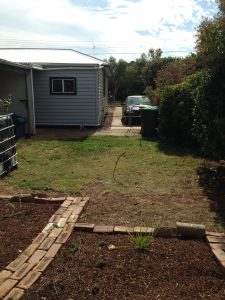 Here I have staked out the final positions for both the olive and the lemon. 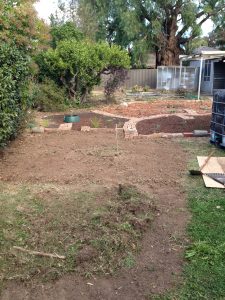 I made the mistake when planting the Julienne Pear of thinking that I could bluff this step but I’m now paying a heavy weeding price.  There’s no denying it, digging up grass is hard work, especially if you want to retain the topsoil most of which is still attached to the grass when you dig up a clump.  This section took a good two and a half hours straight to complete. 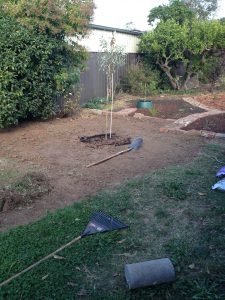 First to go in is the Hojiblanca Olive tree.  The soil in this part of the garden is quite rocky with little topsoil.  Will be interesting to see how the olive handles this.  In theory, it should be ok. 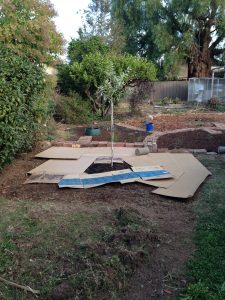 Next is the sheet mulching. Once again, I paid a price on the Pear tree for skimping on this step. I recommend thick cardboard with lots of overlap at the edges.  This should give me a year or so of protection from weeds and whatever is left of the grass during which time it’s to be hoped that the local natives and the olive have established themselves and will crowd out any undesirables. 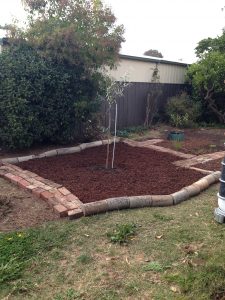 Mulch goes on top of the cardboard.  Note that you can add manure/mulch/compost below the sheet mulch layer if you want. For my Julienne Pear I put down some lucerne hay and manure and then put the cardboard on top. For the olive I decided to experiment and forego this step. 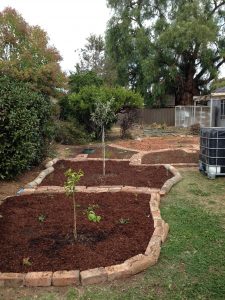 Fast forward to the finish. The Lisbon Lemon is in with some manure and compost below the cardboard layer to give it a helping hand. You can also make out the first lot of local natives. Running Postman is a groundcover that’s reputed to be a nitrogen fixer and is also a food source for Honeyeaters.  I’ve planted that around the lemon.  There’s also a Tree Violet near the fence on the left that is just out of shot.  I’ll add a couple of other dense shrubs in here and that should provide a nice windbreak for the macadamias behind, not to mention some tasty olives and lemons as well.