As I mentioned in a previous post, the Werribee area has the lowest annual rainfall of any location south of the ranges.  Given that fruit crops in general are heavy drinkers and avocado and macadamia in particular are from the sub tropics, my garden was clearly going to need more water than what nature would provide.

The commercial options for water tanks are very expensive.  That’s true for small tanks that you buy off the shelf and even moreso for the large tanks that require concrete bases to be built and underground pipes to be laid.  Luckily, in Melbourne there is no shortage of 1000 litre IBC totes that are used to transport things like olives, vegetable oil etc..  I picked up the first few full clean and ready to go for $100 each.  For the next batch I found a guy nearby selling dirty ones (that had contained vegetable oil) for $25 each.  A quick scrub and they were all set.

The setup for these was straightforward.  First I wrapped them in black plastic to stop algae from forming.   Then I located each one right beside its associated guttering downpipe and simply ran pvc pipes from the gutter to the tank.  As I had the roof and gutters replaced as part of my house renovation, this was easy but it would be just as easy to hook up to existing gutters.

The hosing connection to get water out of the tank depends on the type of IBC tote.  For some of the smaller outlets you can buy ready-made connectors online. I had 10cm wide caps on the first batch and couldn’t find anybody in Australia selling connectors.  I simply got an ordinary garden tap from bunnings, drilled a hole in the plastic cap and screwed in the tap. It worked perfectly.

The total cost for a 5000 litre capacity was just over $500 and that was only so high because I paid $100 each for three of the tanks.  If I was doing it again now with my new contact, the whole thing would cost about $150.  That’s compared to about a $5,000 quote to have a single 5000 litre tank installed with concrete base and underground pipes running from the guttering downpipe.  As well as being financially a no-brainer, the distributed nature of the tanks has allowed me to change my mind about placement which I’ve done a couple of times as the garden design has evolved.  That’s a luxury I wouldn’t have had with a single tank and its associated infrastructure.

Anyway, here’s a few photos to give you the gist of my setup. 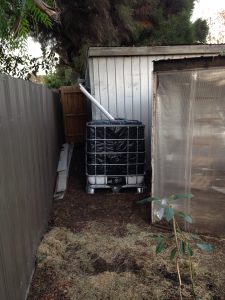 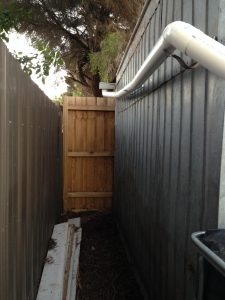 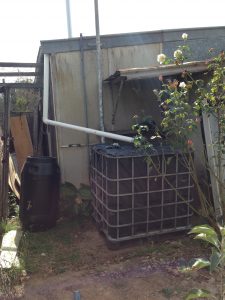