Last weekend I attended the Living Design Process workshop run by Dan Palmer. The idea for the workshop arose out of Dan’s dissatisfaction with the way many permaculture projects are run. He has begun to formulate a new approach to both house and garden design that substitutes big upfront planning for an iterative, adaptive and immersive process that he calls Living Design Process.

As the day unfolded it became clear to me that I had unwittingly used a very similar process with my house renovation and garden construction in Werribee. I had found that process to be very fulfilling but had never stopped to think why. Given that Dan has started to put some conceptual structure around that very topic, I want to document the process I went through as I think it’s a nice example of Living Design Process.

For the sake of clarity, I’ll break the post into two parts. The first will give a basic chronological account of what I did in Werribee. In the second, I’ll attempt to relate back to Dan’s Living Design Process concept and draw out some of the principles I think are at work there. Here’s the story.

In February 2014 I bought this house in Werribee. 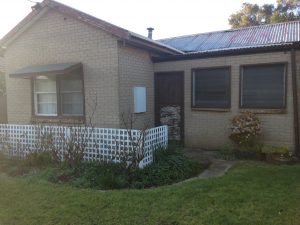 Not the prettiest thing you’ve ever seen but it had two things going for it 1) it was cheap; 2) it had a decent sized block of land.

I had two high level goals I wanted to achieve at the property. Firstly, I wanted to gain some skills and experience at urban gardening. Secondly, I had become interested in energy efficiency and wanted to see what difference you could make to a house by retrofitting energy efficient materials and technologies. I approached the exercise with an experimental spirit. I knew that I didn’t know much about what I was doing, but I was keen to learn. The fact that the property was cheap and the house old and degraded meant that I had little downside. If things went wrong, I didn’t have much to lose as the property was really only worth the land value anyway.

So, I moved into this old, rundown house with crusty old carpets, dirty walls, chipped paints and all the rest. My first goal was to get the garden going. I kicked off with about 8 raised beds and tried my hand at the usual annual vegetables such as beans, broccoli, carrots etc. I tried raising my own seedlings and killed more than I care to remember. In general, I made all the usual beginner mistakes. I also got to eat food that I had grown which was very satisfying.

The house itself wasn’t exactly a paragon of energy efficiency. Whatever the temperature was outside, that was the temperature inside. By July this meant that overnight temperatures inside the house were down to 3 and 4 degrees. This surprised me as the windows and doors seemed to close properly and there were no obvious drafts. I was to subsequently learn that the devil is in the details – the sealing around the windows, the sealing around the architraves and skirting boards, the insulation (or lack thereof) in the ceilings and walls etc.

I started to wonder what to do with the house. I toyed with the idea of trying some energy efficiency retrofitting such as caulking up holes or adding glad wrap to the windows for cheap double glazing. But the reality was that the house was really old and rundown. It didn’t seem worth the effort.

My thoughts turned to renovation. The main body of the house was quite small and could probably be renovated relatively cheaply. I had a friend who recommended a good builder. He came out and had a look and came up with a ballpark figure which was within the amount I was prepared to pay. By mid-August we were underway. 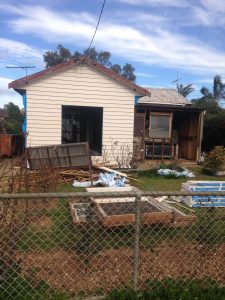 We had made a time and materials agreement rather than a fixed price quote. To offset some of the cost, I took several weeks off work to be the second pair of hands on the job mainly doing the grunt work that would normally be done by a labourer. Although I didn’t know it at the time, both of these factors would be crucial in getting a great outcome.

As it was just myself and the builder, the pace of construction was fairly relaxed. This also turned out to be a crucial factor. It meant that design could happen as we went. Because everything was stripped back to the frame, we were free to consider a wider range of possibilities as we had the ability to modify the frame where necessary, for example to fit in a larger window. I ended up buying quite a lot of the materials as we went. Among other great finds was a wonderful old kitchen bench that was being thrown out of a very expensive house in Brighton.

After about a week of mulling over it and not knowing which way to go, I came across a brand new pair of french doors that were being sold dirt cheap. They had been ordered as part of a new build but were the wrong size. I checked the measurements against the lounge room wall and realised that they would fit very nicely and would give almost floor to ceiling glass on the north side of the lounge. I ran the idea past the builder and we both agreed it would be a great addition to the lounge room.

This solved the front door problem (it would now go on the side of the house like I wanted it) but more importantly it opened up new possibilities. Now you could walk out of the lounge into the front yard. By coincidence, there was already the makings of a porch there as the old house had a strange kind of room in that space and the roof was still attached. With a bit of extra work we could make a very nice front porch.

So now I had french doors leading to a porch and a porch leading to an outdoor space (the front yard). The front yard itself was already essentially a small courtyard which suited the whole concept perfectly. With one seemingly innocuous opportunity (the french doors) several great design decisions snapped into place and the design of the front of the house and front yard came into being. The lounge room is the best room in the house in winter when the afternoon sun floods in through the french doors, heating up the room and filling it with light.  Even better, the porch blocks the summer sun from the french doors meaning unwanted heat is kept out of the house in the warmer months.

The last major decision of the reno was what to do with the floor. The floorboards were in good condition and I liked the idea of sanding and polishing them up. I tried to get some quotes but the tradies didn’t even want to show up to measure, they just gave a price per square metre figure. Only one guy did come and visit and he was something special. You could tell this guy loved his job. He knew exactly what sort of boards they were (they were actually a rare Tasmanian oak that were a very unusual dimension being several millimetres narrower than the standard). I gave him the job and he really went above and beyond and the floorboards to this day are a wonderful feature of the house.

With the reno over, summer was fast approaching and that meant getting the raised vegetable beds in order. Although I had set up some basic irrigation (using Ollas), it was still a chore to keep the vegetables watered over a very hot summer. I quickly came to the realisation of exactly how much work was involved in this whole vegetable growing game. I started to hunt around for alternatives. That was when I came across the Edible Forest Garden books. Over summer I eagerly read the books from cover to cover and began to plan out my own forest garden. Here are a few different designs for the same patch to give an idea of the variety of options you can go through. 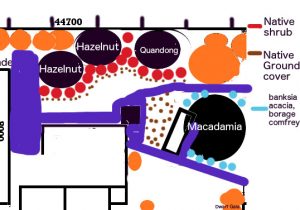 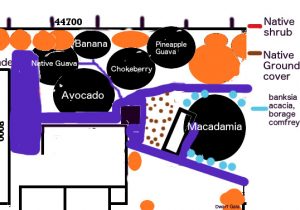 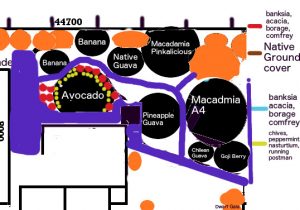 As I look back on these now I have to chuckle as they bear no resemblance to what I actually planted. I spent a lot of time pouring over these designs that never actually got used. But the exercise of designing was enjoyable. In hindsight, I think the main benefit of the exercise was to slow me down and make me consider things in some detail before taking action.

As soon as the heat of summer was over, I got down to planting the first lot of guilds which you can see here. And you can see the rest of the garden progress in the posts I made over the next couple of years.

During this time I was also finding my preferred composting method after playing around with hot composting, experimenting with solar air heaters, water tanks and greenhouses. These small, inexpensive and low risk experiments turned out to be really useful and the idea of using IBC totes as water tanks worked so well that I ended up using those exclusively in the garden.

By 2016, having enjoyed the results of the renovation to the main house, my thoughts turned to the back of the house. This consisted of an old fashioned outhouse and bathroom plus a small bedroom. Getting up in the middle of the night in winter and having to walk outside to go to the bathroom apparently isn’t most people’s idea of a good time.  So having an enclosed bathroom and toilet seemed like a good way to improve the house.

I toyed with the idea of pulling down the structures and building from scratch but it went against my retrofit idea. The next best thing could be to build walls using the existing framing and turning the back patio area into a living space. Using the same builder and method as last time (go with what works) we did exactly that. 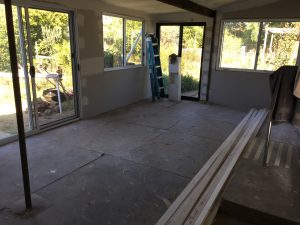 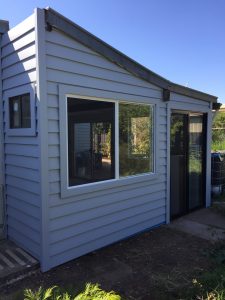 With the house fully renovated and the garden fully planted, I now found myself in a bit of a lull. It was great to be able to walk into the backyard and pick something for dinner but there’s was no more formative work to be done, just the fine tuning.

That would have been fine but there were other tensions at play including the two hours of daily commuting to work, which was getting rather tiresome. The property was now in good shape and it seemed like an appropriate time to cut my ties with it, which is exactly what I did.

So ends the first round of this post. In the second, I will attempt to add some structure to these events and explain why it was that I found this process so rewarding and how it relates to Dan Palmer’s Living Process Design.